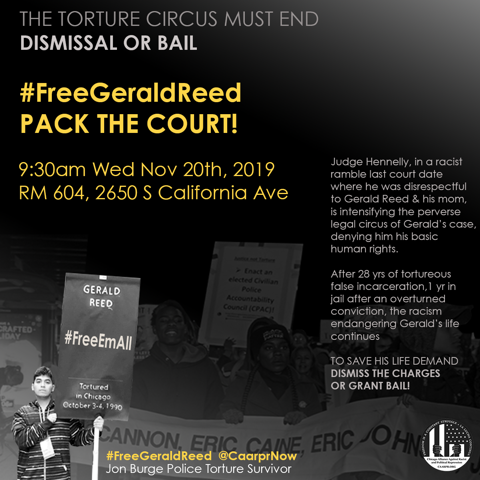 On Wednesday, Dec. 19 the Judge Grainer granted Gerald a new trial. On Dec. 21, the defense filed for bail, pursuant to Gerald's constitutional right to bail since his conviction has been overturned. The special prosecutors objected to the motion for bail and asked for two weeks to respond. So, after 28 years of imprisonment based on evidence that has been thrown out these lower than low special prosecutors are still prolonging the suffering of Gerald Reed and his family. They have no compassion or shame, they just have greed for the $500 an hour they are being paid with our tax dollars. Tell Cook County Supervisor Preckwinkle not to sign their checks, they are obstructing justice. The bond hearing, we hope will happen on Wed., Nov 20th 9:30 am Cook County criminal court, room 604.  This is almost one year after Judge Grainer granted a new trial, and several months of the new Judge not making a determination. In fact, after several months of back and forths, the Judge revealed he did not have the full transcript from the original trial ruling nor all of the documents from now retired Judge Grainer!

Who is Gerald Reed?

On October 3, 1990, Gerald Reed, 27, was arrested and questioned regarding the murder two days earlier of Willie Williams and Pamela Powers. He was questioned by Detectives Michael Kill and Victor Breska at Area 3 Homicide, members of the notorious “Midnight Crew” of torturer Jon Burge. They beat him and kicked him repeatedly, and broke a metal rod that was in his right thigh along with the surgical screws that held it in place, causing him excruciating pain. The rod had been surgically placed years before to repair his thigh-bone, which had been shattered by a gunshot.

It was clear to Reed that the beatings would continue until he agreed to confess, and he did. He repudiated the confession at his trial and has proclaimed his innocence ever since. There was no other material evidence against Reed at his trial. Gerald Reed was convicted of both murders, and sentenced to life in prison without possibility of parole.

But that did not stop the torture. For 27 years Reed has repeatedly requested medical intervention to fix the horrible and excruciatingly painful damage done by his torturers. He has been unable to walk. Finally, last year, he was taken from Stateville Correctional Center to Dreyer Medical Center in Aurora, where Orthopedic Surgeon Steven I. Rabin performed the first step required to repair the terrible damage to his thigh-bone and ease his suffering. Dr. Rabin made it clear that a second, follow-up surgery, was necessary to improve his condition and end his pain, along with physical therapy.

The Illinois Torture Inquiry and Relief Commission held, in a decision rendered on June 18, 2012 and further amended on March 19, 2014, that there was a “preponderance of evidence” that Reed had been tortured and forced to confess. Yet more than 5 years later Gerald Reed remains in prison and in terrible pain as a result of being tortured by Chicago Police.

The Chicago Alliance Against Racist and Political Repression calls on all people to join with Gerald Reed’s large family and community of friends and supporters to demand:

DAY 1
Gerald Reed entered court in a wheel chair, black pants and white shirt. Court filled with his family members and supporters, also dressed in black and white in solidarity, Gerald’s wonderful mum, Armanda Shakelford, fellow police torture survivors & families, and members of CAARPR. All stood up when Gerald entered the room Gerald’s Atty Elliot Zinger mapping timeline of period before & after he was arrested on Oct 3 1990 and tortured into the false confession:

DAY 2
WITNESS on stand - Gerald Reed’s mother, Armanda Shakelford, bravely testified as to what she saw when she first visited Gerald in CCJ after his arrest and torture. She describes how he was struggling to walk and how his face looked, like he was in terrible pain. Special Pros. Rosen asks the question “Do you love your son?” tries to intimate her testimony is false because she loves Gerald.

WITNESS on stand - Friend of Gerald Reed, who knew him after he had recovered from surgery (1986) and before he was arrested in 1990, testified to Gerald’s health & ability to move around without a limp, no indication his leg had previously been injured [In 1985 Gerald had surgery to have a metal rod inserted to help heal a femur broken from a gun shot wound)

WITNESS on stand - Niece of Gerald Reed, testified how Gerald had looked after her when she was young [period after he recovered from his 1985 surgery and before 1990] she spoke about how she never saw him have problems walking or moving around and how they participated in many physical activities together, Gerald played a big role in her life.

WITNESS on stand, Special Prosecutors Expert Witness - Orthopedic Dr, gives a sparse testimony on how inserted rods in fractured legs can weaken/break over time by what is called cyclic loading, States that a metal rod inside someones bone cannot be broken without the femur also fracturing [to suggest therefore that Gerald’s rod in his leg was not broken by Breska] Under cross examination by Gerald’s Atty Zinger, we learn the only document this expert examined was a radiology report from Cook County Hospital, even though he could have asked to interview Gerald himself, see all the case documents and X-rays of Gerald’s right femur. Fee for testimony $6000 (paid for by tax payers)

WITNESS on stand - Expert Witness Orthopedic Dr, trauma specialist, surgeon who operated on Gerald Reed in 2016 [he repaired some of the terrible damage to his leg, though more surgery is needed! ] Presents on TV screen multiple x-rays of Gerald’s leg, showing the implanted broken rod, points out the first healed fracture (from old gun shot wound) and then a SECOND fracture that occurred when the rod moved, a kind of movement perpendicular to the femur bone that breaks the rod and could only be caused by a forceful blow [totally undermining Spec Pro.Rosen's stance that the rod could not have been broken by Breska because the leg was not fractured a second time, it clearly was) Fee for testimony $600 (not at taxpayers expense)

Gerald Reed’s surgeon explains how there are different kinds of fracture, from dynamic to transverse fractures. Second fracture in Gerald’s leg is a traverse or stable fracture. A stable fracture in a femur means a person can walk with such an injury, though in terrible pain. A main thrust in Spec.Pros Rosen’s persistent questioning throughout the hearing has been how Gerald made his way from the interrogation room in Area 3 to police van to Cook County Jail etc without needing a wheel chair or crutches [as if the torture cops of Midnight Crew at Area 3 would have a stash of walking aids & were perversely willing to provide such things after they are done torturing!]

DAY 3
Gerald Reed testifies for nearly 3 hours about what happened during the 2 days following his arrest, calm and consistent, tearful at moments, Gerald describes in horrific detail how Breska and Kill used both psychological and physical torture to force him into the false confession (This article from the Tribune also covers his testimony).

On Oct 3, 1990, around midday, Gerald was arrested & processed at District 7 (61st & Racine) the next day Breska and Kill arrived taking him in their car to Area 3 (39th & California) however they did not take him directly there. They stopped along the way, in an area Gerald was not familiar with (the judge later comments that this must have been somewhere in Bridgeport) They stop the car outside a house where an older caucasian women comes out, Kill goes and talks with her as a young boy also comes up, Kill comes back and they drive round the back into the alley. The same woman then also shows up at the alley side, outside her back door. Kill and Breska get out of the car, after taking Gerald’s hand cuffs off they tell him to “run".
Gerald asks why they are dropping him off in this location [knowing that something really bad was going to happen]
Kill’s reply “you’re a smart ass n*****” he has his gun drawn. Gerald did not run or do anything at this point.
They then get back in the car and he is taken to Area 3.

At Area 3 Gerald Reed is taken to a small room with a window, a table, small wooden chairs one close to a wall that Gerald is cuffed to, the room is cold. Kill and Breska start asking him questions about Pamela Powers [who was murdered, along with Willie Williams, 2 days earlier] Kill shows him photos of Pamela Powers in the hospital, Gerald tells them he had nothing to do with it. “I didn’t know anything about the murders” At some point he is left in the room alone, he hears Breska outside the door “I will take care of this one” Breska comes into the room with a very aggressive and threatening tone “Do what I say” and “You’re gonna cooperate with us or something will happen to you” Gerald describes how he tried to avoid eye contact with him but “He was all in my face” calls him an “ n***** “ and “m***** f*****”.

Breska began kicking the chair Gerald was sitting on, he kicked it so hard the chair breaks and collapses. Gerald falls and his head hits Breska this enrages Breska and he starts kicking Gerald as he lays on the floor. “He got to kicking me, and I just curled up in a knot. I was calling out for help. No one wanted to be there”

How many times approximately did he kick you Zinger asks “at least 10 times or more” the beating lasted about 2-3 mins, Gerald describes how he was kicked in the knee, thigh, buttocks, and back including the area of the leg where the inserted metal rod and pins were located. Kill enters the room, gets Breska off him and some point Kill tells Gerald “if i didn’t help out” he would get the death penalty, Kill, using this particular threat further states to Gerald that this would “send his mother to the grave”.