CPAC stands for Civilian Police Accountability Council.  Our CPAC ordinance is currently in the public safety committee in Chicago City Council and, if enacted, it will create a democratically-elected Council to oversee the Chicago Police Department.

Our Rights and Power

We have the right to decide who polices us and how we are policed. We need the power to defend that right. CPAC would give us that historic power.

Through a council directly elected by Chicagoans to serve us, CPAC gives communities control. With community control, we decide if, when and how we use the police -- up to and including abolition. We can defund, demilitarize, and regulate the police out of existence. But we need the power to make these reforms ourselves, through representatives who will defend our rights.

Over 60,000 people across the city have already demanded CPAC from their alderperson! You can join them by signing our on-line petition: https://www.caarpr.org/cpac_petition

Mayor Lightfoot does NOT support CPAC because it takes power from her and puts it in our hands. She did support it in 2016 before she was Mayor, but -- surprise -- now that she's been elected, she doesn't. She needs to hear from you! Email her and tell her you want CPAC now: letterforthemayor@cityofchicago.org

There are currently 19 alderpeople who support this legislation. We need 26 to get it passed, and 34 to make us veto-proof!

If your alderperson is not on the list below, please call them today to demand that they support CPAC. You can find your alderperson's phone number and email address here: https://chicago.legistar.com/People.aspx

If your alderperson is on this list, please call them today to thank them and ask them to stand firm in their support of CPAC (their numbers are in the table below). Alderpeople are persuaded by their constituents and need to know that they are making the decision of the people!

If you don't know who your alderperson is, you can look them up here with your address (try copying and pasting if link doesn't work): https://www.chicago.gov/city/en/depts/mayor/iframe/lookup_ward_and_alderman.html?fbclid=IwAR2iYLKqVOQiYtsUZuVSQPisnhkZEH7iNErLHjWaruoN9O2h_JIIBRA02SA

Legislation has been introduced in the Chicago City Council for an all-elected Civilian Police Accountability Council. Now is the time to join the Alliance and join the struggle for community control of the police. Learn more: naarpr.org

Posted by Chicago Alliance Against Racist and Political Repression on Thursday, September 21, 2017

Police are supposed to protect and serve the community, but right now in Chicago all the power belongs to the mayor and the police union.  We demand CPAC so that WE have the voice in who polices our communities and how they are policed.

The Council will have one elected member for every two contiguous police districts for a total of 11 members. These members will be directly elected by you. They're only allowed to accept campaign contributions from within their district. Council members must have at least two years of experience protecting the rights of: those who have been victims of police misconduct and brutality, African-Americans, Latinx, young people, immigrants, LGBTQ+ communities, Muslim communities, those living with mental illness or other disabilities, or those who are living unhoused.

The most recent draft of CPAC gives the council many important responsibilities, and broad authority to carry them out.  For example, CPAC will enable the people to have the power to:

We've been working for the passage of the CPAC bill in a variety of ways:

We need volunteers like you to help us with these and other activities to support the CPAC legislation.

Learn more about volunteering with the Alliance »

Why is CPAC the ONLY ordinance that will give the community power over how they're policed?

The Mayor wants to pass GAPA ("Grassroots" Alliance for Police Accountability) because GAPA would keep the power with the Mayor's office and the police. See how below. 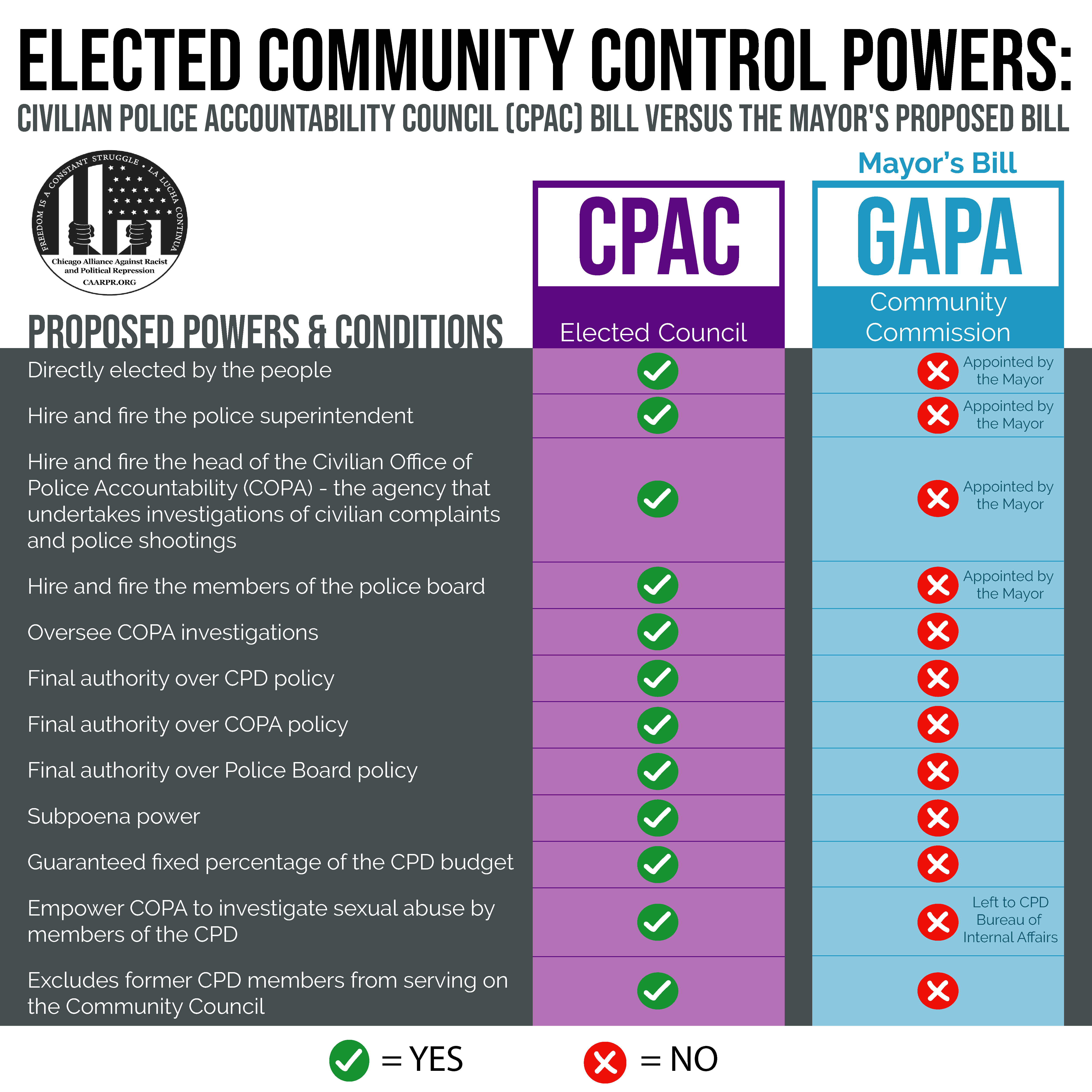